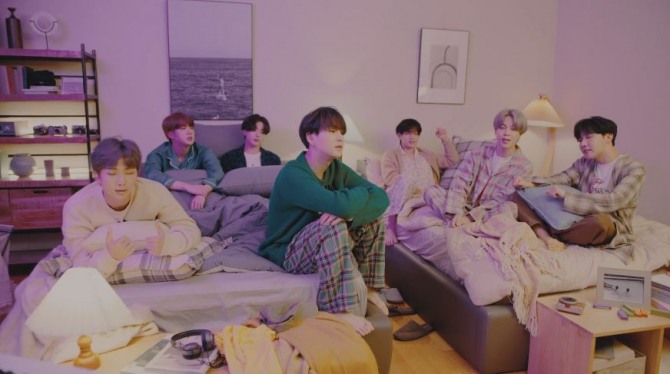 BTS revealed a new video for the group’s song “Life Goes On.”

The video is titled “On My Pillow” and in it the septet sings the song in bed, wearing pajamas of different colors and styles.
Purplish light shines over the band members and the two beds where they are spread out. The effects are minimal, focusing on showing the musicians comfortably lying or sitting on the beds.

On one bed, Jin and Jungkook lean against the headboard, both tucked inside the covers and wearing green pajamas.

The camera moves to the next bed, where Jimin sits in red checkered pajamas with his arms wrapped around his legs. On Jimin’s left lies J-hope, while V leans against the headboard in floral printed white pajamas.

On the edge of Jin and Jungkook’s bed is Suga, in a green sweater and matching green and red checkered pants. Propped up on pillows next to Suga is RM wearing a beige shirt.

Near the end, the performers stand up on the beds and sing the song together.

BTS on Friday dropped their latest full-length album "BE," an eight-track set fronted by title track "Life Goes On."


Suga catches up with fans through V Live 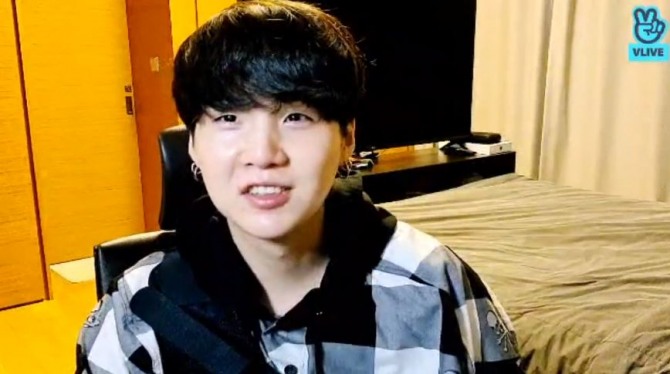 
Suga of BTS tuned in to V Live on Saturday to catch up with fans. He’d been absent Friday during the official global conference for the group’s new album “BE,” due to his shoulder injury.

With his injured arm in a bandage, Suga said he was still recovering.

“It really hurt for about three days following the surgery. I couldn’t sleep properly but I can sleep now. So I suppose I’m getting used to it,” he said.

Expressing regret at not being able to take part in promotional activities for the new album, Suga said, “I feel almost quarantined now. I can’t do anything. We really should be grateful about being able to use both arms.”

According to Suga, he’d been out of the hospital for a little less than three weeks.

Although he was used to the pain now, Suga said, he hadn’t slept properly for around two weeks and still couldn’t use his injured arm.

About “Telepathy,” his song on the new album track list, Suga said it was a song he had written a while ago and had almost forgotten about.

He said he was spending the time studying English and working on new songs for now.

“Unable to hold concerts due to COVID-19 and with my arm and everything, I don’t feel that good these days, to be honest,” Suga said. 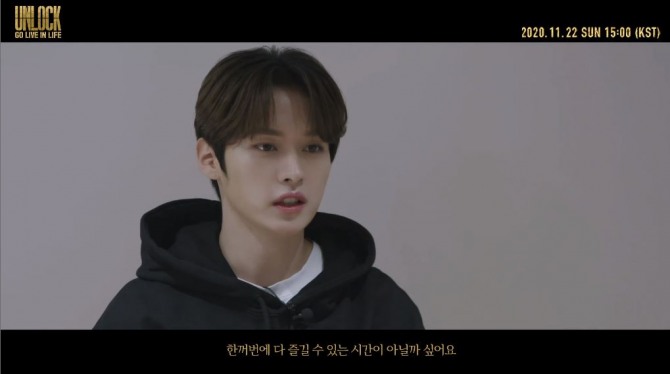 
Stray Kids talked about their feelings ahead of their first online concert on Sunday.

“We’ve really missed holding a lengthy concert of our own,” Changbin said. “Although it isn’t our first concert, we’re preparing for it as if it is -- embracing the excitement and passion we felt back then.”

“I really wanted to -- well, because we’re preparing for Stays,” Felix said, referring to the band’s fandom.

In between interviews, the video showed the band members practicing dance routines with masks on due to concerns about spreading the coronavirus.

“It would be a lie if I had said I didn’t feel any pressure (ahead of the concert),” Seungmin said. “But I think the concert has become a source of motivation for me to work harder now.”

I.N. said he wants to enjoy the experience. “I felt I didn’t show myself 100 percent in the previous concert,” he said, adding, “I thought, ‘let’s just enjoy myself as I am.’”

Han said he hoped the concert would be a source of comfort for fans struggling through these difficult times.

“I think it will be a time to enjoy all our songs and all the stages Stays had been anticipating,” Lee Know said.


Pentagon’s Yuto excited ahead of concert 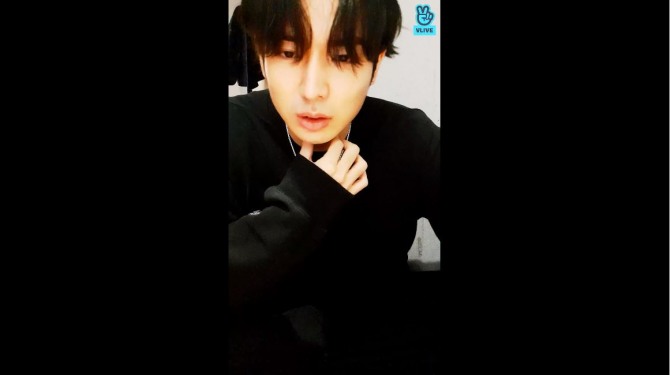 
Pentagon’s Yuto said he was excited about getting ready for the group’s first-ever online concert.

“I’m very thrilled. We’re going through a difficult time with the coronavirus, and I’m thankful to be able to meet with the Universe,” he said, referring to the band’s fandom.

Yuto said he’d been practicing for the concert and was tuning in to V Live from the agency building.

Refusing to say too much about the upcoming concerts, he said, “It would be boring to know the results of a yet-to-be-released film. You wouldn’t want to go to the theaters to watch it. Likewise, I hope you guys can come to the concert without getting any spoilers.”

Yuto, looking tired himself, expressed worries about his bandmate Hui.

“Hui couldn’t sleep properly throughout our recent activities. We even felt sorry for sleeping because he had so much trouble falling asleep,” he said.

Another member, Wooseok, joined Yuto during the live broadcast.

Also looking rather tired from the long day of practice, Wooseok said, “I think we were really busy throughout this year, even ahead of our recent comeback.”

Wooseok talked about how he was especially tired after finishing the survival competition “Road to Kingdom.”

“We were given three days off after finishing the program, but since we’d been working so hard, preparing for a mission for one month and doing that for three months, I didn’t know how to take a rest properly,” Wooseok said.


Naver’s real-time broadcasting app V allows fans to interact with their favorite K-pop stars through live broadcasts. The app is available for Android and iOS. For more information, visit http://www.vlive.tv.