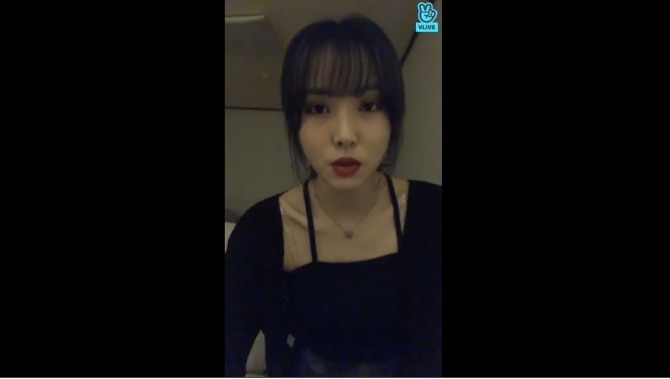 GFriend’s Yuju tuned in after midnight, from her room, having just come back from practice.

“I considered changing the setting, maybe in the practice room, because I always do V Live in my room,” she said. “But since I’ll be talking on my own, I thought being in a comfortable place was important.”

The room was dark because it was late at night, Yuju explained, and she didn’t want to bother others with too much light.

She took the time to explain the new cover (the Yuju-only version) of “Spring Is Gone by Chance,” a song she released in 2015 with rapper Loco.

“I remember three years ago, I read the comments on that song and people were talking about how it gave them butterflies,” she said. “But recently, I looked at the comments again and a lot of people were reminiscing (about) how good the past was, how much they missed it.”

Afterward, she’d decided to write new lyrics for the song on the theme of reminiscing and add her story into the song.

“Depending on when you listen to a song, it evokes different emotions, right? I wanted to reflect that in the revised lyrics.” 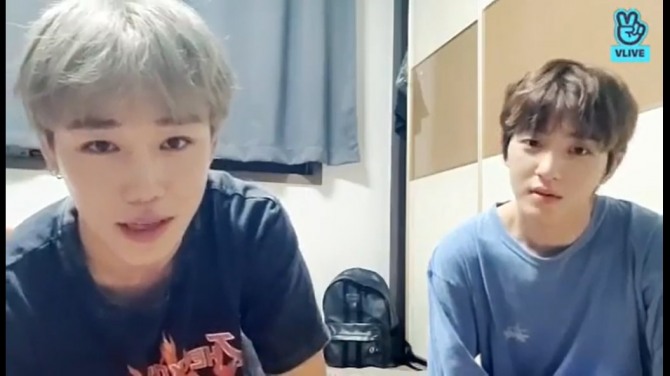 Jangjun and Jaehyun of Golden Child turned on the app after a fan meeting, when they were the only ones left in their dormitory.

“Jibeom went out to get a computer cable. Seungmin went to see his parents quickly, and Tag left some of his stuff at home so he went there to get it,” said Jangjun.

It was a semi-vacation for the band, they explained: Members who had prior commitments kept them, but others visited their hometowns or just relaxed in the dormitory.

“I told the members before, but I never got to grab a drink with my dad yet,” Jaehyun said. “So during this vacation, I did. At first I was hesitant, thinking maybe I shouldn’t drink with him, and thought my dad might feel restricted, but he turned out to be very lenient. And to share a TMI fact, Tag was there too.”

“Did you get tipsy?” asked Jangjun.

“I didn’t, and Tag also said my alcohol tolerance got higher,” said Jaehyun.

During vacation, Jangjun said, he misused a skin medicine, so he had to stay at home a lot and cover his face. 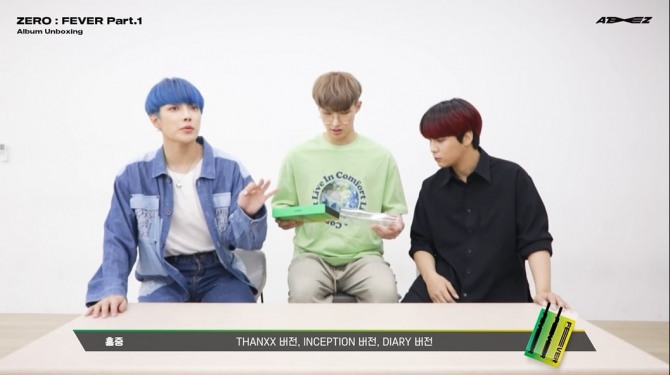 Hongjoong, Mingi and Jongho of Ateez were the first group to unbox the band’s latest album, “Zero: Fever Part 1.” Of the three versions -- Thanxx, Inception and Diary -- the three picked Thanxx, which was wrapped in green.

Hongjoong said they’d taken a lot of photos for this album, and showed the members’ faces printed behind the lyrics.

San and Seonghwa unboxed the Inception version, and Wooyoung, Yeosang and Yunho unboxed the Diary version. 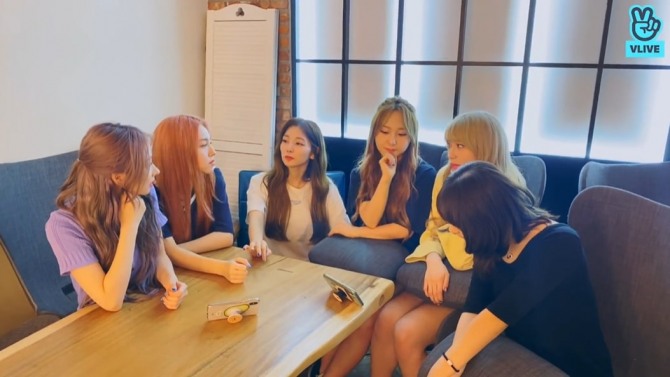 All the members of Rocket Punch tuned in for a quick chat with fans ahead of a new release.

Since it was dinnertime, they discussed what they should eat for dinner. Hot dogs, galbi stew, soybean noodles, sashimi and gamjatang were thrown out as recommendations.

Juri suggested Korean pancakes because it was raining outside, while Dahyun voted for jjajangmyeon. The others weren’t too enthusiastic about Dahyun’s idea.

Later that night, the band’s new album’s highlight medley video was expected to roll out. “If I’d give a bit of a spoiler, some of the songs aren’t our usual style,” said Sohee.

Dahyun, Suyun and Yunkyoung said they’d bleached their hair for the album, an unfamiliar style for them, but said they were all satisfied with their new hair.

Naver’s real-time broadcasting app V allows fans to interact with their favorite K-pop stars through live broadcasts. The app is available for Android and iOS. For more information, visit http://www.vlive.tv.