EXO uploaded a video about the making of its latest promotional event, “EXO the Stage.” 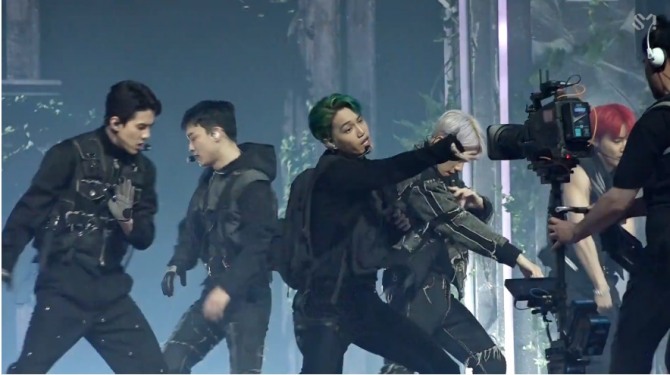 “We have prepared two versions: X-EXO and EXO,” said Suho.

Taking over the mic, Chen said he was especially excited to see how fans would enjoy the songs.

“I am giddy, shaky and very nervous,” confessed Kai before going onstage.

Chen asked the fans if they liked the dramatic set and Chanyeol said Chen designed it. Chen waved his arms quickly, denying Chanyeol’s joking remark and saying he could not take credit for someone else’s work. The showcase was engineered by Sindong of Super Junior, said Suho, thanking the veteran idol.

“Which do you like better, EXO or X-EXO?” asked Chanyeol. When the audience chose EXO, he said X-EXO would ask the same question later and he would be watching from the sidelines.

After the first half of the performance, while the musicians were taking a break and catching their breath, Suho thanked the fans for coming despite the cold weather.

“We wanted to see you, EXO-L, so much, really,” he said. “All of us were looking forward to coming back.”

Victon’s Sejun back but busy

Sejun of Victon took to V Live as soon as he returned from Japan, where the band recently held its first fan meeting events. 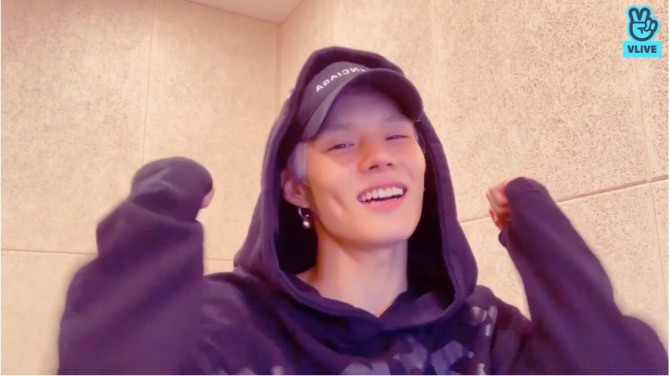 “I arrived today and wanted to let you know I am back safe and sound,” he told viewers. He had traveled to Tokyo and Osaka, the first stops on the band’s Asian tour “Voice to Alice.”

The idol sympathized with fans who couldn’t purchase tickets to Victon’s first stand-alone concert, which had just become available that day but sold out quickly. He was amazed at the news that they’d sold out, and said he wished the concert venue were bigger.

Although he had just returned from overseas, he had already worked out and attended a recording practice. Fans told him to get some rest but he said: “I can’t. If I rest now I feel like it will be over. I am not putting my feet up.” 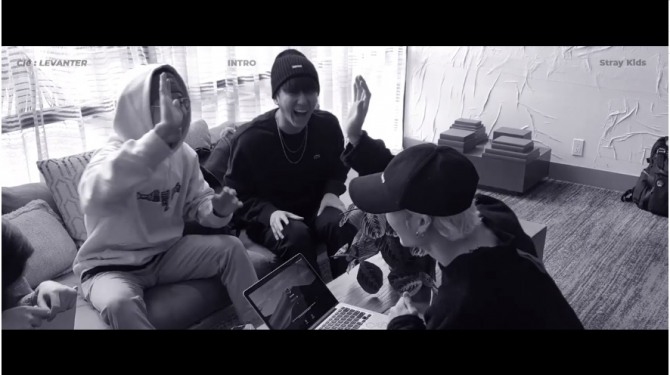 A levanter is a strong easterly wind in the Mediterranean region, explained Bang Chan, who quoted from a poem by Paul Valery: “The wind is rising! We must try to live!”

When Bang Chan came across the poem, it clicked, he said, because it resonated so strongly with the message Stray Kids wanted to deliver.

Lee Know said his favorite from the new EP was “Sunshine.”

“When I heard the guide from the song Han made, I instantly liked it. Even more amazing is that he wrote the song in two hours,” he said, giving his bandmate a big hand.

“We 3Racha stayed in the US for another week (after the rest of the band left) working on the songs, and the scenery in Los Angeles was so beautiful -- the mountains and the sky,” said Han, part of the band’s songwriting trio along with Bang Chan and Changbin.

“Even when I get a day off I work on my own instead of taking it slow because I am anxious, as if I am falling behind,” he confided. For those like him, he said, he wanted to offer a three-minute break with this song.

The bandmates continued their day at the camp site, playing a game to earn “diamonds” that they could use to purchase treats, and finally ended it with a feast. 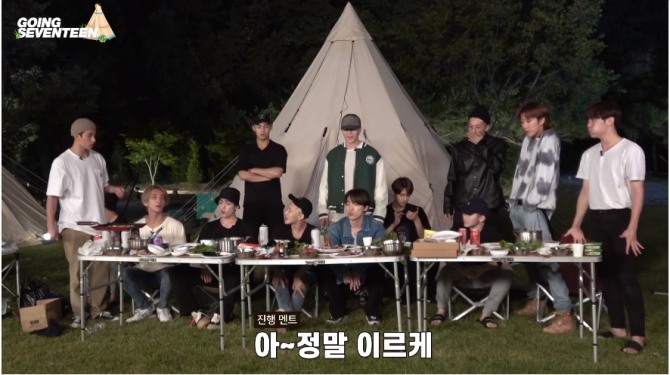 Before going shopping they counted the diamonds they had earned by completing their missions, only to realize they had lost 13. The staff had collected them when they were not paying attention and asked to trade them for a one-time license granting the right to ask them to do anything, without any reservations. Despite leader S.Coups’ protest that it was wrong for the staff to nab the diamonds in the first place, they decided to take the deal.

First the boys secured tents and went to get food, getting everything on the menu. After splitting up into two teams they built the tents and prepared a barbecue, chopping vegetables, cooking instant noodles and making kimchi jjigae.

After wolfing down over 30 servings of meat and 30 packs of noodles in about an hour, as well bowls of jjigae and other dishes, the 13-piece act played a round of toss to choose the five who would clean up.

Naver’s real-time broadcasting app V allows fans to interact with their favorite K-pop stars through live broadcasts. The app is available for Android and iOS. For more information, visit http://www.vlive.tv.